And on the Seventh Day…

Rest is a relative term around here. For example, today Squash slept in until seven-thirty and (sadly) that is note-on-the-calendar worthy. And everyone is pretty much lazing around here now – but after spending “only” a few hours playing in the yard and going to obedience class. Again, not your typical day-in-the-life-of around here, but not what most people would truly consider a day of rest.

Normally Squash is very busy. He always needs something to do. If he’s not scootering or canicrossing or going for a walk or going to class or chewing on a bone or playing with his ball or barking at the world or rolling around on his back or digging a hole in the yard or playing chase or tug or wrestling with Maisy… that is, if he has utterly exhausted all the other possible ways to fill his day and he simply doesn’t have anything else to do, then he’ll fill his time by pacing around the house. And eventually, he sleeps. Sometimes not until after he’s reached a mental state that is the equivalent of an overtired, overstimulated toddler’s delusional I’M NOT TIRED I’M NOT TIRED mania.

In contrast, the main reason for this unusually lazy(ish) day is that the  the last several days have unseasonably (nay, freakishly) warm and humid and we went scootering both yesterday and the day before — albeit early in the morning before it warmed up too much (I guess it’s not all bad that Squash is an Early Riser). Yesterday the dogs were getting a bit droopy towards the end of the run; I felt bad and didn’t want to overwork them, so I hopped off and ran the scooter for awhile to give them a break. Like any athlete, a mushbaby-dog just needs some good old fashioned down time to recharge after that kind of hard, tiring workout. 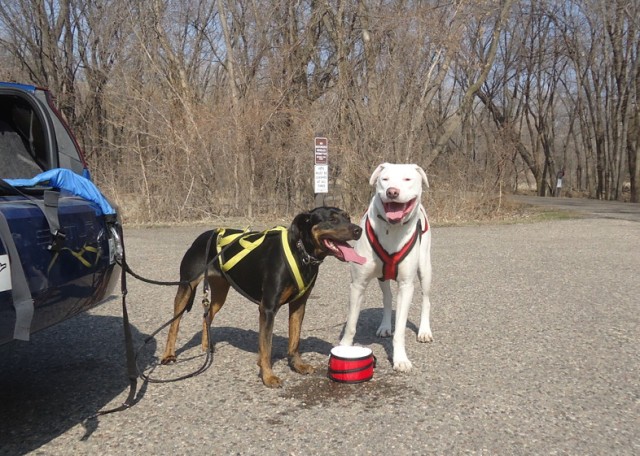 (Maisy and Squash would like to remind you to always, always bring post-run water, kids!)

Anyway. Since we are doing this stuff for fun, I never want to cross that “overdoing it” line, but I find it a fine, fuzzy line to pin down and walk. Getting stronger and better conditioned means working hard, but working too hard is counterproductive if it means overexertion or injury. I know time and experience will (eventually) give me better judgment, but for now some days I feel like I’m being a wimpy chicken while other days (like our droopy day yesterday) I feel like a slave driver.

Last summer and fall I would not scooter two days in a row or more than three times per week (usually two). Over the winter(ish), when it was cool, I would go two days in a row if the trails were ok. As the weather continues to warm up I may drop back down to not going two days in a row, depending on the weather, or at least keep the runs shorter or mainly work on commands (like the gee-haw parking lot practice from the other day) on the second day. We will live and scooter and learn (and hopefully actually skijor, sigh) together, but I will probably always err on the side of being a wimpy chicken.

So what to do in between scooter days? Cross-train, of course! Just like human athletes, doing the same workout day after day works the same muscles day after day. And resting from scootering doesn’t have to mean resting completely. 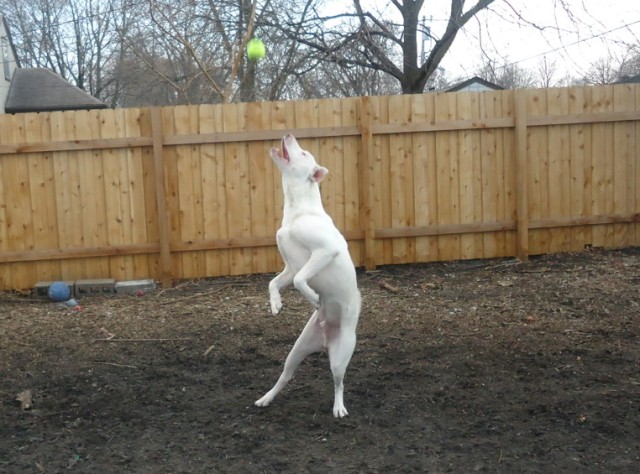 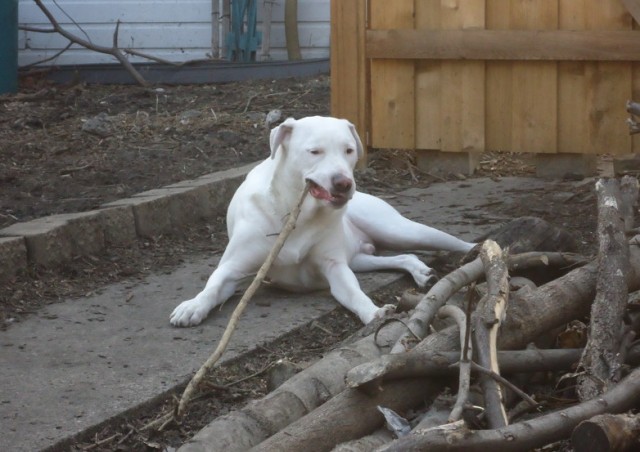 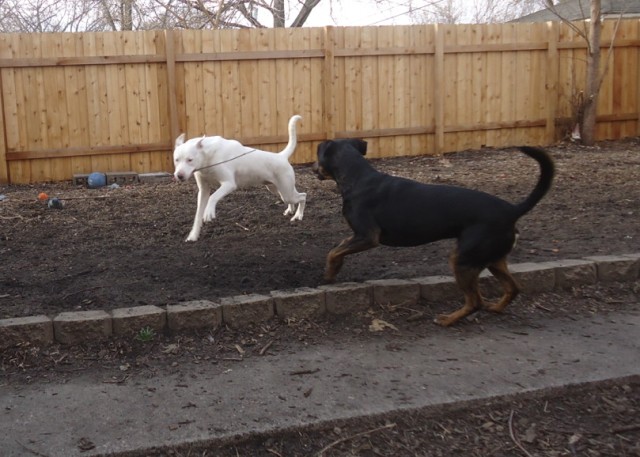 pacing (inside or outside),

and (not pictured) standing in his kennel barking (which he’s doing as I type this for some unfathomable reason) all have their place in the life of a ridiculously busy dog.

I do have a point, other than wanting to post a bunch of pictures of my dogs (which I do love to do), and it is this:  Like kids, it’s important for dogs to have some unstructured/unforced play time even if they also play a sport. It’s good for their brains and it’s good for their bodies, and some kinds of exercise are (relatively) restful compared to the strenuous workouts. Although it sometimes feels this way, I don’t HAVE to take my 16 month old Alaskan husky scootering every day to keep him happy, he’s better off with some balance in his life (and so am I).

And lastly, occasionally they even rest. Although… that’s a relative term.

This entry was posted in Dog Talk, Health, Scootering, Training. Bookmark the permalink.