Benefit of the Doubt

In my middle age, I’ve developed a fairly significant tree pollen allergy. Anyone living in Minnesota will therefore understand the depth of my addiction to mushing when I say I willingly – nay, enthusiastically – took my dogs out to scooter among the trees today. And I was feeling pretty puffed up and pleased with myself for braving the source of my misery in order to spend some time with my dogs and exercise them.

In the middle of a long, abnormally cool spring it’s acutely more warm and humid today. So when Squash started hanging back and leaving slack in his line I kind of assumed he was just being heat intolerant or lazy. Usually when he’s just slacking I can cheerlead him into being more enthusiastic, but he just wasn’t having it today. Oh, that dratted heat. But if I can force myself to go out into a pollen-drenched world, surely he can get his act together and put a little effort into it! That’s what I was thinking. Because let’s face it, while this is something I love dearly about him, sometimes he can be a goof-off.

My dogs are blessed with good feet and a general physical resiliency. A couple of times Squash has gotten a few slightly worn spots on his pads that resolved with rest and soft surfaces, and once Maisy cut her webbing on some crusty/icy snow. Other than that, I really haven’t had any problems with them physically. I don’t routinely bootie them and only use paw wax under certain circumstances. But although I rarely suspect it as a problem, when my dogs are doing something out of character (like cheerleading-resistent slacking off) I always force myself to grit my teeth and stop for a quick physical once-over. I pretty much never find anything, and I’ve gotten into a mindset where I don’t expect to find anything.

That was a mistake. Because today I found something. 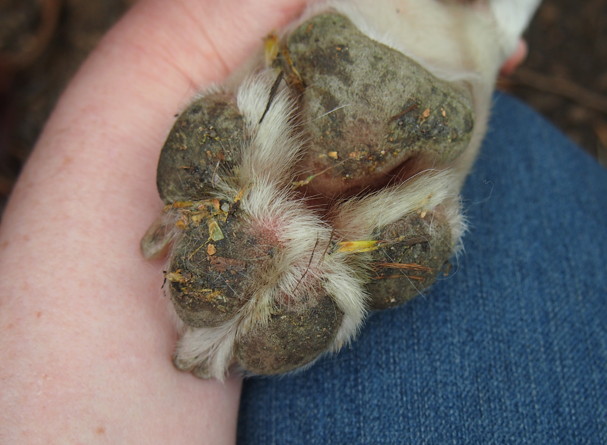 It’s a little hard to see, but there are a bunch of sticky seed thingies stuck to the bottom of Squash’s paw dropped by one of the dratted trees along with its dratted pollen. And what’s left is just the ones I couldn’t pick off easily, there were a bunch more. Still, they weren’t really the problem, because what you can’t see (since I cleaned them all off immediately) is that there were a bunch of small pebbles that had subsequently stuck to the sticky seed things on two of his paws. So he was essentially walking around with pebbles in his shoes digging into his feet with every step, which would make anyone not want to run and pull. Once I cleaned his feet up he ran fine.

So the lesson I’m taking away from this is that I have really wronged my dog in my mind. Even though I forced myself to go through the motions of checking him over and I found the source of the problem and it all turned out ok, I wasn’t actually expecting to find something wrong. In the future, I’m going to try to give him the benefit of the doubt. He’s a good dog, so he deserves it.

This entry was posted in Dog Talk, Health, Scootering, Squash. Bookmark the permalink.