I have a sort of “home base” at the state park where I almost always park the car and start my runs. It’s a small, centrally located and relatively unused row of parking spots set back far enough off the main road that the dogs can’t get into the way of traffic when attached to the trunk latch and next to a nice patch of grass but not next to any large chunks of woods. So it’s a good spot for me to spread out over a couple parking spaces getting the scooter ready and letting the dogs drop (go potty) before a run without bothering or being bothered by anyone else, generally including wildlife.

Today I pulled into my usual parking space, got the scooter out of the front seat, and then as I was walking around the car to the trunk I looked up and saw… 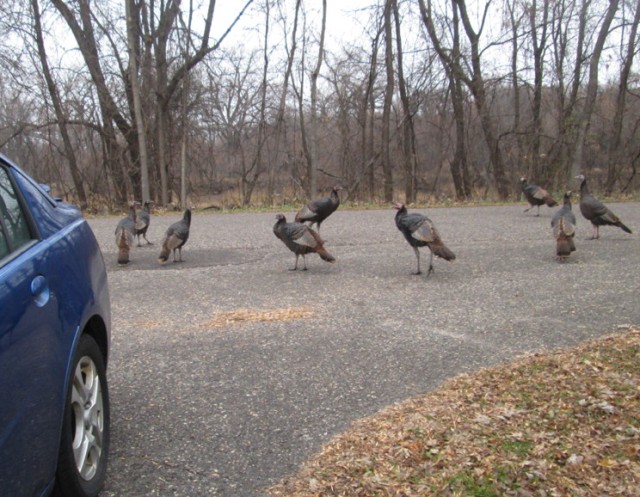 They must have come up out of the strip of woods across the road there (which is right next to the river and has a path “sunk” down a bit compared to the level of the road), because they absolutely were not there when I pulled into the spot.

I almost got right back into the car and moved to a different area. And then I thought “No, I am going to trust my dogs and my training” and kept getting my gear ready while the dogs watched the turkeys completely ignore me, and pecking and turkeying their way down the row of parking spots and then on down the road. 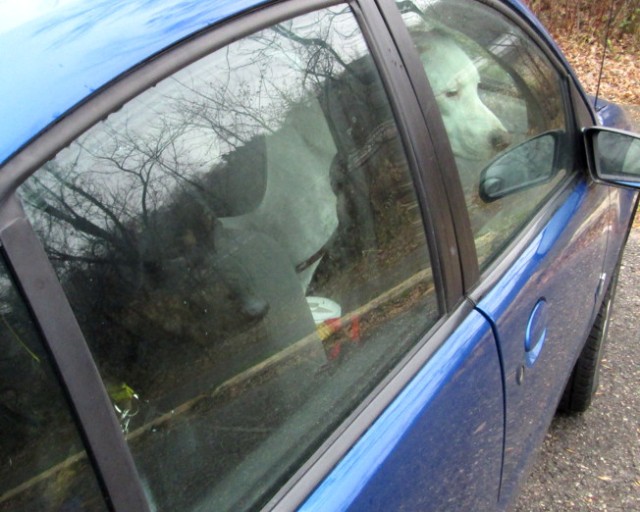 By the time everything was ready (I admit I might have intentionally been a bit pokey) the flock had made their way not out of sight, but at least past the point where we turn off the road and go in the opposite direction. And the dogs did really, really well with their ON BY. Like, so well that I’m gnashing my teeth that I have misplaced my helmet mount for the GoPro and so don’t have any footage of it.

What I didn’t know at the time is that as we were setting off on our run, not only did THIS flock of turkeys start working their way backwards towards us from the end of the same loop we were running, but there was a second flock of turkeys pecking and turkeying at our halfway/turnaround point. And damn it all to helmet mount hell, THE DOGS WERE PERFECT. Even Squash. They also absolutely nailed ON BYs past 2 small groups of deer along the way. I am incredibly proud of them. The only ON BY that we horribly failed was a tree that apparently was so irresistibly delicious that it cried out to be peed upon IMMEDIATELY but that was so close to the end our run that I didn’t even care about it.

This entry was posted in Scootering, Training Diary. Bookmark the permalink.