I’m having a lot of feelings about the Loppet this year. We finished, and nothing bad happened. If you recall last year my expectations for the Loppet were modest and simple: I wanted to finish, and I wanted nothing bad to happen. But last year after finishing I was riding an endorphin high for the rest of the day while this year I felt drained, and while ultimately ok, as if I had been through a ringer. 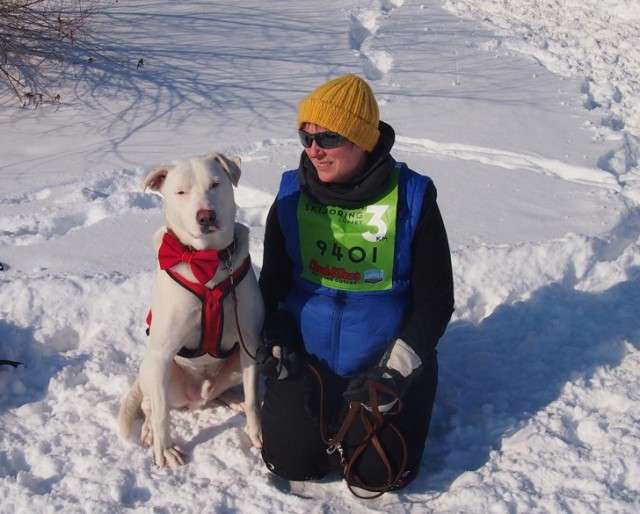 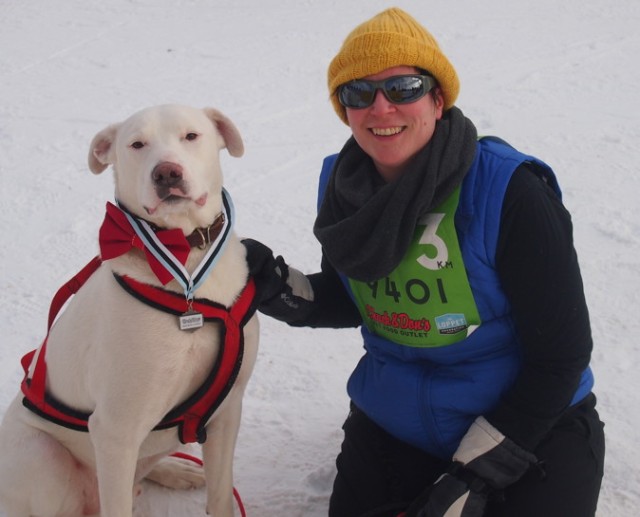 Why the difference? Thanks to a little bit too much post-race indulgence last night I found myself with several insomniac hours to ponder the answer to that question. In retrospect, I think there was an unfortunate combination of several different factors.

Getting ready to start

1. First and foremost, different – and unrealistic – expectations. “I just want to finish and for nothing bad to happen” is soooo Loppet 2013, right? This year, we were a seasoned race team! Surely the novelty of the experience had worn off enough to allow us to focus on being a lean, mean racing machine. My expectations were still pretty modest: I hoped to shave a few minutes off last year’s time. But in retrospect even that was still pretty unrealistic. As of this year’s Loppet, we had exactly two races under our belts. I really should have approached this as a new experience. And really, I do this for fun and sometimes I forget that serious competition isn’t that fun for me. If I’m being totally honest, even being around that many strangers isn’t always all that fun for me. I’m really ok if “finishing and nothing bad happening” are my goals forever and ever.

Cresting the last hill going into the finish

2. The weather. Along with the rest of the country, we’ve been in and out of polar vortexes that have limited our opportunities to practice and exercise. So Squash went into this race under-exercised, meaning that he was firmly in super-playful mode – which to someone who doesn’t know him is probably a bit like being charged by a rhino. At one point we were actually booed by a few spectators because Squash tried to engage a small dog in play; honestly, we did deserve it. It probably looked frightening to the casual observer.

I fell 3 or 4 times on the flat parts of the course, but not on the hills.

3. We don’t really practice around other teams or even around other dogs except when we happen to encounter them on our regular trails. If we’re going to continue entering races, I’m going to have to get with the local skijor club and remedy that.

4. Squash has developed a dislike of malamutes. Which is… pesky, to say the least, in a sport where we are almost certainly going to encounter them at events. There is a malamute in one of our classes that Squash took an instant dislike to. That dog did absolutely nothing to provoke such a reaction, but one day their eyes met across the room and Squash apparently decided he was badwrong. In retrospect, I think it actually started before that, last winter when we unexpectedly encountered an oncoming skijorer coming fast down a hill and around a corner towards us. This startled all of us and then the skier allowed his dog to approach us, provoking a reaction from Maisy and a “monkey see, monkey do” reaction from Squash. That dog was a large husky, close enough to a malamute not to matter from my dog’s perspective.

Oddly, because absolutely nothing has happened because of this, this is the issue that probably was the most upsetting for me yesterday. So far, he just stares and growls; I can interrupt and walk him away to work on some attention and he’ll forget about it and even be able to walk by the same dog a few minutes later without reaction. But it’s very real; at one point during the race he was taking me on the joy ride of my life when I suddenly realized it was because he saw a malamute ahead of us. I was able to choke up on the line to keep him close to me and the path was wide enough to then pass safely ON BY (which took some convincing), but if he’d been able to reach that dog I have to say I’m not entirely sure what would have happened. And that’s hard for me to swallow about my sweet, goofy boy who has always loved everyone and everything. This is something that I’m going to have to do some serious work on if we’re going to continue to do races.

5. This event is getting hugely popular, with large numbers of extremely excited dogs with varying social skills congregating in a relatively small area. Some of which are malamutes. Some of which dislike malamutes. Some of which (not any of these were malamutes) with owners who, despite regular officially announced pleas to the contrary, allowed their dogs to indiscriminately approach other dogs. Some of which had owners I had to yell NO, THANK YOU at when my subtly creeping farther and farther away was not a clear enough signal that I didn’t want their snarling, fixated dog to “say hi to” mine. All of which ended up with me having to be hypervigilant and choke up on Squash’s leash a lot, which made HIM hypervigilant and even more overexcited.

6. I struggle with anxiety. Not the “pre-race butterflies in my tummy” kind of anxiety, but the “requires medication and is still occasionally debilitating even though I’m good at hiding it” kind of anxiety. As part of my strategies to prevent it from totally overtaking my life, I walk a line between recognizing whether I should seek cover from or stand my ground against that approaching emotional tornado. I was fine yesterday, but in retrospect it wouldn’t have been the worst idea to seek cover. Our pre-race malamute encounters and the crowds had shaken me, and I was making Squash nervous.

7. The course layout was different this year, in a different location. It was a little confusing, which added to my anxiety. And towards the end of the race, the 5K and 10K racers (some whose race yesterday was the actual national skijoring championship) joined up with the novice 3K route. Which was stressful. Those are people I do NOT want to mess up because my dog wants to say HI to everyone, especially at the end when he’s tired. So several times I just pulled off to the side and waited for a wave of other skijorers to go by.

I realize that this post sort of makes it sound like I didn’t have fun. On the contrary, we had a LOT of fun, and I hope that comes through in the pictures. But I try to take something away from every experience I have, and what I am taking away from this is an opportunity for reflection. Reflection not only on what I can do to make things better next time but on whether the ratio of (enjoyment:stress) associated with these events justify whether there WILL be a next time. Whether I’m a race kind of person at all, or if this little band of misfits (anxious mushbaby, dog-reactive Maisy, and malamute-disliking Squash) are best suited to playing alone with each other on the quiet, empty weekday morning trails together. And if that’s how things shake out, I would be totally ok with that.

This entry was posted in Races, Skijoring. Bookmark the permalink.