Earlier this year, Maisy tweaked her back and was out for a bit. You may remember how I decided to take Squash out for a scooter run alone. It was kind of a cluster.

So when Maisy tore her ACL, among all the other things to worry about was the worry about what I was going to do to exercise Squash while her activity is restricted. In the short term we took a few trips to the North Shore to do some hiking and did a LOT of canicross while working hard on polishing up his commands, especially ON BY (which plenty of getting-ready-for-winter squirrels have been happy to provide practice for).

As the days and weeks went on I realized that he was getting more and more serious about getting and staying out in front. The cherry on top was during a recent hike when he found and dragged me down a side trail.

In which I clutch the line and lean back.

And suddenly it seemed more possible that we could make this me and him scootering thing work. And today, I went for it. I kept my expectations modest, which was good because we didn’t start out that great.

BUT, one thing I have noticed on walks and hikes recently is that he tends to start out a little scattered but get more focused as time goes on, so I hung in there and things improved.

As it turned out, he really needed to poop there when he jigged off to the side. After that business was taken care of, things got even better despite me having to help him line out.

I’m only going to keep these videos so long, but he was pulling for minutes at a time! Definitely we have a long way to go, because there were plenty of these kinds of shenanigans: 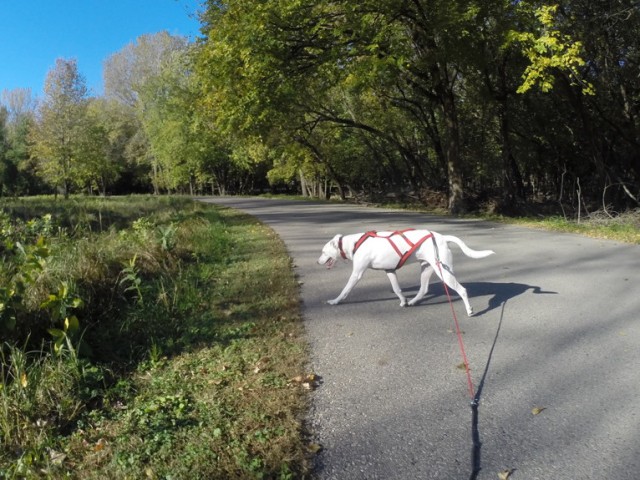 I mostly just like how pretty his trot looks here. 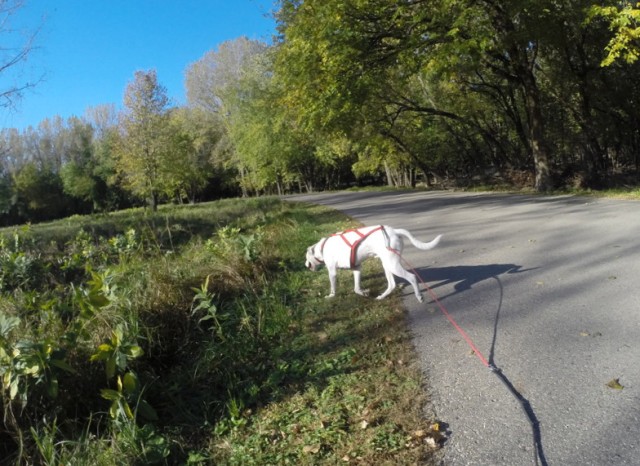 I dig it; he’s a lot like me in that at this stage he seems to need to work a little, rest a little, work a little, rest a little and that’s still how I work best. But I’m beginning to see the short-term goal of making one continuous lap around that circular road as achievable. I’m actually incredibly proud of how he did today, considering how much we’ve struggled with attention and focus in the past. Baby Squashies is growing up.

Oh, and the deer did not disappoint today.

Maisy, meanwhile, is doing well. Her stitches are out and she is walking really well. She’s clear to go on short leash walks (just 2-3 blocks once or twice a day at this point) and will have her first rehab appointment in a few days. This gives you an idea of how well she is using her leg; I have to walk her with that head harness because she wants to PULL PULL PULL without it and that is not allowed yet.

Also, our cat Solo has seemingly taken it upon himself to keep her company and watch over her during her convalescence.

This is where they killed me with cute.

He only hangs out with her on days that end in Y.

So that’s where we stand. All things considered, we’re doing pretty well here. I’ll keep updating throughout Maisy’s recovery and Squash’s solo adventures. Hopefully before we know it, we’ll all be back together again.

This entry was posted in Maisy, Scootering, Squash, Successes. Bookmark the permalink.