So, This Stuff Happened

He’s not afraid of it, quite the contrary; I’m pretty sure he sees it as a giant squeaky toy that makes even more obnoxiously exciting noises than actual squeaky toys. He can literally grab it out of my hands and run away with it if he breaks his stay while I am vacuuming, so at some point I decided this wasn’t the hill I wanted to die on and just started putting him outside when I vacuum.

Later, it will become more clear how this is relevant to a post about how Squash and I went scootering again today.

I stuck with my nice long pre-run warm up walk, towards the end of which this happened: 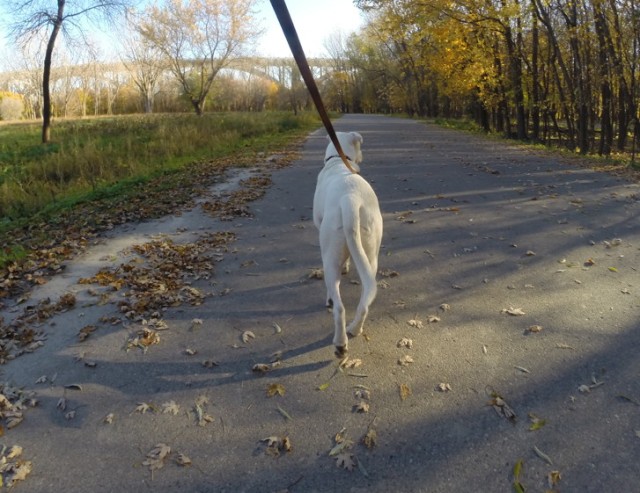 Ready to rock and roll.

which made me hopeful that this meant he had temporarily gotten goofing off out of his system and was ready to get down to work. We started out a little shaky but today was definitely a huge improvement over last time:

We weren’t gangbusters right out of the gate, but I am happy with a couple of things: Although the line could be tighter, I’m pleased with how nicely he waits while lined out at the start. Also, I’m also much happier with my line management to get him around that first curve out onto the main road from the parking lot. And he got down to business more quickly.

We were moving pretty well and I was in fact juuust starting to think “wow, this is going well!” when off in the distance appeared some park rangers driving a truck towing a giant leaf blower. It was really ingenious, they were using it to clear the parking lots off the main road of leaves by just blasting them back into the surrounding woods.

Also, it sounded a little bit like a gigantic vacuum cleaner. This sound, this most beloved of sounds, apparently traveled through Squash’s ears straight to the dial in his brain marked “drive” and turned it up to 11. Because THIS happened:

For two full laps around the loop. You read that correctly: Two. Full. Laps. Mostly at an all-out gallop. My boy took me for a ride, and it was glorious. And I am so incredibly impressed by and proud of how he’s stepped up into this new role. And no, the giant vacuum won’t always be there but I honestly don’t think he needs it to be; it was just a serendipitous kick-start and I think he’s got the chops to keep it going.

And then this happened.

Don’t worry, I didn’t fall. Long ago, I learned to both recognize when things are about to go so spectacularly wrong that a crash is inevitable and to safely bail off the scooter before it actually happens.

So we got up, brushed off, and restarted. And then after another half a lap THIS happened:

And he lost his damn mind. When it was in the parking lots, it was just beautiful background music to his ears but now… now this glorious noisy contraption was RIGHT IN FRONT OF HIM and he really showed me what he had, which was actually slightly terrifying but I just let him chase it because he deserved it and we had to go that way to get back to where we were parked, anyway.

And then we went for a nice post-run cool down walk, got in the car, and went home. But I don’t have any pictures of that.

This entry was posted in Scootering, Squash, Training. Bookmark the permalink.