So, I’m dying to get out on my skis. But if I can’t have enough snow to ski and skijor, I guess the next best thing is that what little snow we did have melted completely so that I could sneak in some scootering today. And I decided to experiment with my lines a bit – but before I elaborate I’m going to briefly explain some line terminology so that in case you are even more of a mush baby than I am you’ll know what the hell I’m talking about. People who already know what the hell I’m talking about can skip to the bottom.

This is a 2-dog skijor line:

This is about as simple as a line gets – one end attaches to the skier’s skijor belt, and the other ends attach to the dogs’ harnesses. There’s really no way to get confused about this as long as you remember what the numbers “one” and “two” represent. The skijor line contains a lot of bungee (you can kind of see it as the fatter parts of the main line and the Y-sections), which helps absorb the shock of any jolts from sudden movements by either skier or dogs.

When I decided to add Pip to the mix, I needed a setup appropriate for 3 dogs. This is where things could get confusing:

Thankfully the manufacturer has the good sense to offer different components in different colors or I’d probably still be sitting in front of the open package, weeping in frustration. So we’ll start at the  musher end (the right of the photo). The shock line is a short bungee section which attaches to the scooter (or sled). Like the bungee sections of the skijor line, its job is to absorb the shock of sudden jolts. But while the skijor line has great swaths of bungee, the shockline is pretty short and the rest of the lines pictured here have no bungee whatsoever.

Next in line is the red section, or gangline (also called a towline). Technically, I suppose any line between a person (on a bike, scooter, sled, skis, or foot) and the dog(s) pulling her could be called a towline, but in this case it is specifically the section or sections between the shock line and the leader line. I think of it as the main line that “the gang” is all hooked up to, although I don’t know if that’s really how it got its name. The gangline I have sectional and is meant to add 1-2 dogs into the team; to add even more dogs, you just add more gangline sections. .

The tugline is the line that attaches from the back of the gangline to the dog’s harness. The neckline is the line that attaches from the front of the gangline to the dog’s collar. Together, the tugline and the neckline keep this dog in position as well as adding his pulling power to the team. In my case, I have one tugline and one neckline attached here because I only have one dog (Pip) that runs in this position. If I had two dogs in this position, I would have two tuglines and two necklines, and one dog would run on either side of the gangline. Still with me? If not, this picture of the dogs all hooked up may help:

You can see the gangline running from the musher (me) to the leader section, and Pip’s tugline (at his rear) and neckline (at his head) keeping him in position. If I had a four-dog team, there would be another dog mirroring Pip on the other side of the gangline (the red line).

To make things possibly slightly confusing, there is a second type of neckline that is used to attach the collars of the two lead dogs; this keeps them relatively close to one another so they can’t wing off in wildly different directions. Since all the necklines attach to someone’s neck, though, I think this is forgivable.

Finally, the leader section is exactly what it sounds like – the section that attaches the harness(es) of the lead dog (or dogs) to the gangline. In my case, because I have two lead dogs, my leader section is Y-shaped with an attachment for each dog (just like my skijor line).

SO… up until now I’ve just been using my skijor line for canicross and scootering because I bought it first and I can be a pretty cheap bastard. But since I had to get this new set up to add Pip to the team anyway, I decided to try using just my shock line and leader line with the scooter today, thusly: 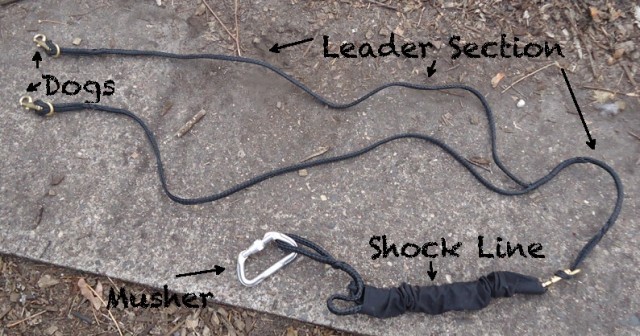 My reasons for this were twofold: One, I just wanted to try it and see if I felt a difference. I’m kind of a trial and error kind of learner with this stuff. Two, the skijor line has always resulted in a somewhat uneven distribution of doggie labor… Maisy almost always ends up pulling waaaay more than Squash. In retrospect, I think maybe what was happening is that if he felt ANY tension on his harness he called it a good enough effort, while she would pull out all the way to the end of her bungee until there was NO give left. And to test that hypothesis, I decided to try the leader line as it contains no bungee whatsoever.

Unfortunately you’ll have to take my word that it was a resounding success, because my camera battery died shortly before we embarked upon The Great Leader Section Experiment and I wasn’t able to take any pictures or video of the action. Three things happened: One, the dogs paced themselves much better. Instead of sprinting straight out of the gate, they kept up a nice steady trot with just an occasional stretch of joy running. Second, they did actually end up pulling much more evenly and Squash was much more engaged and into pulling than he normally is. I don’t really have an explanation for either of those things other than that they’re trying to tell me that they like how this line feels when they’re pulling better than how the heavily bungee’d line feels. Which is just fine with me, because the third thing that happened was that I felt much more steady on the scooter. I think I must get sort of sling-shotted around by the skijor line’s vast tracts of bungee, because I feel like I got jolted around more with the skijor belt. It’s almost as if… different equipment is made for different activities for a reason!!

So live and learn and be willing to experiment and pay attention to what your dogs might be telling you, and who knows what can happen. You might just find a new favorite way to do something.

This entry was posted in Equipment. Bookmark the permalink.