Now that the division of labor is more evenly divided, I’ve been gradually working on increasing the dogs’ conditioning. The weather has been cool enough and I’ve been dragging myself out of bed early enough to safely start adding some distance to our runs.

So far things have been going pretty well. Physically, I suspect they are probably capable of far more than I’m asking from them right now, but there’s really no reason to push it. Mentally, on the other hand… since being reassigned to a position that just barely merits being called “lead”, The Boy seems at times to get a little drunk with power. He tends to blast out of the gate at Warp Factor Squash (which admittedly is exciting and exhilarating) but poop out and lose interest further into the run (which is only exciting and exhilarating if you enjoy untangling tangles and practicing starts over and over).

See? There’s some nice focus, and as an added bonus Maisy appears to be levitating. This has nothing to do with the subject at hand, but I also love how their shadows look here.

Oh lord, her ears. And now Squash appears to be levitating. And that’s all I have to say about this. 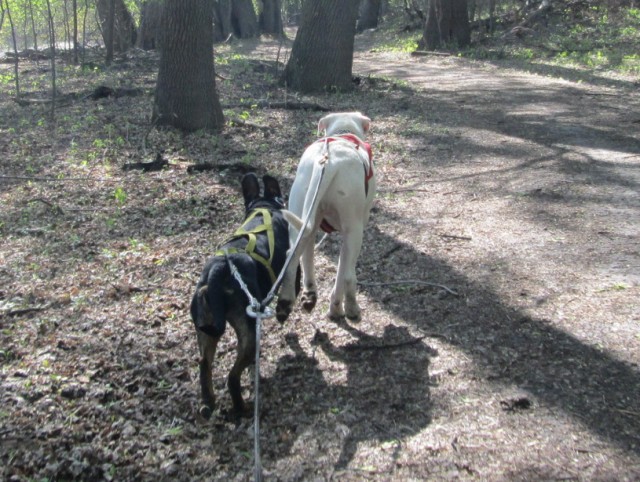 But then… oh, Squash. “Letting” Maisy do all the work isn’t the same as “giving her a turn”.  You might take a lesson from her work ethic, though. The slack line tells your story.

Or perhaps you’d rather be distracted by that bird off in the distant distance:

Yes, that’s really what he was looking at. Incidentally, that bird also (indirectly) taught me that it’s probably time to get the brake pads replaced on the scooter, but that’s a story for another day. And look at Maisy still trying to go in the right direction even though she kinda wants to see what the fuss is about, too.

So what’s a mush baby and a pair of pooped mush puppies to do? I decided to take a cue from labor law (and other mushers) and offer, nay require, my mush puppies to take a break midway through the run. It starts out as a water break and inevitably (well, both times I’ve tried it so far anyway) turns into a grazing break: 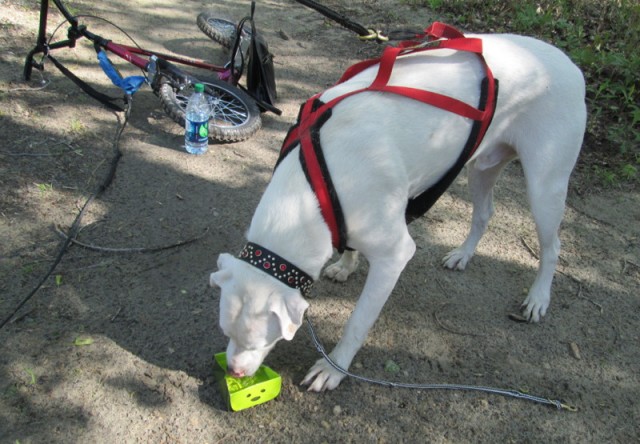 As a slight aside, that little portable water bowl is called a Slurpabowl and Slurpabowls are really nifty. They are made of thin cardboard, fold down completely flat so they fit in your pocket, and someday if and when they reach the end of their slurpy days they are recyclable. So that’s that.

ANYWAY, so far Project Siesta has been a success. Granted, I’ve only tried it twice so far, but so far our water/grass breaks give me back dogs who are recharged, refocused, “on by” better, and aren’t as interested in veering off to eat the grass on the side of the trail as we’re running by, thusly: 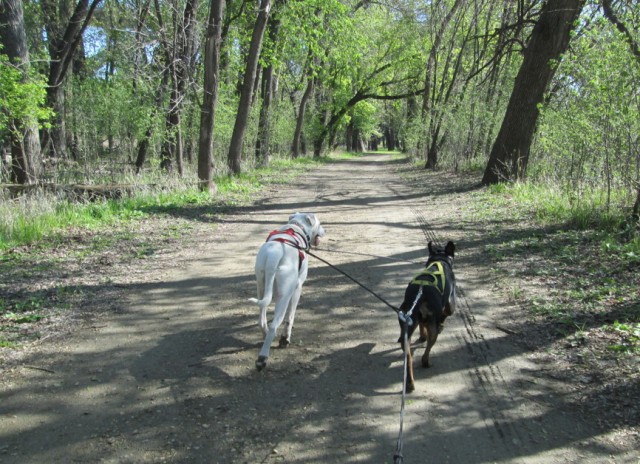 Besides the fact that they are back to evenly divided labor, I love (above) how Squash is trotting along looking all casual while Maisy looks all intense and (below) how they’ve fallen into a nice, steady trot. 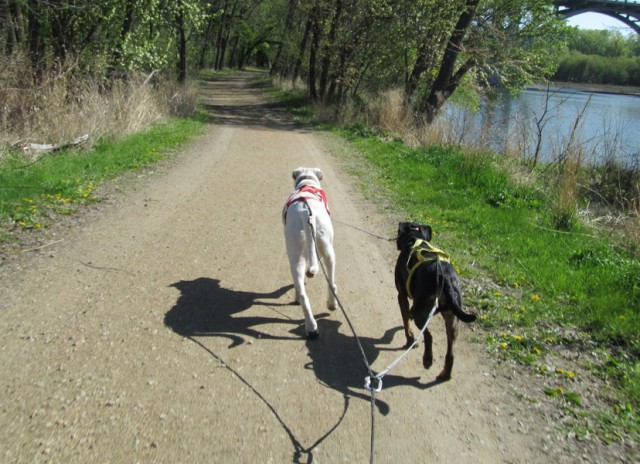 Ok, just one more, because we are approaching the parking lot and the end of the run and they are still working pretty hard (although still at that nice steady trot instead of warp speed), which has always been a challenge: 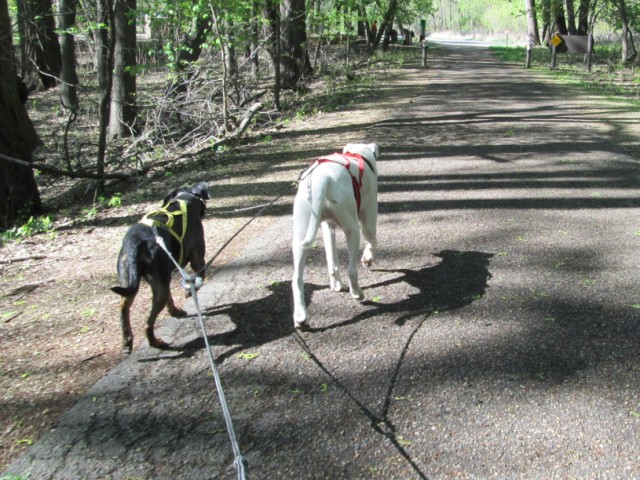 And when we get back to the car, they get another water break while I get the scooter loaded up into the car. They look so beautiful to me here.

So that’s my siesta story. I don’t really have a way to wrap this up, so here’s a funny picture of the mush puppies in the backyard after we got home:

This entry was posted in Dog Talk, Health, Scootering, Training. Bookmark the permalink.