I just love these dogs.

Here is part of why I love them so much. Maisy does not love skijoring as much as she loves scootering, especially when the snow is noisy. Yesterday, the snow was fresh and untrodden and very, very quiet. Today it was well-traveled and crusty after a warm afternoon yesterday and re-freeze overnight and very, very loud and crunchy. Crunchy loud snow makes Maisy a little worried and a little spooky at the beginning of a run.

But because she has so much heart, she skijors anyway. And because he has so much heart, Squash does not get spooked by her spookiness and acts like nothing is wrong. And because no one else seems to think anything is wrong, and because her partner is just running along like normal, and because she is such a good worker, within 10-15 minutes she has generally forgotten that crunchy loud snow ever worried her and just throws herself back into it. 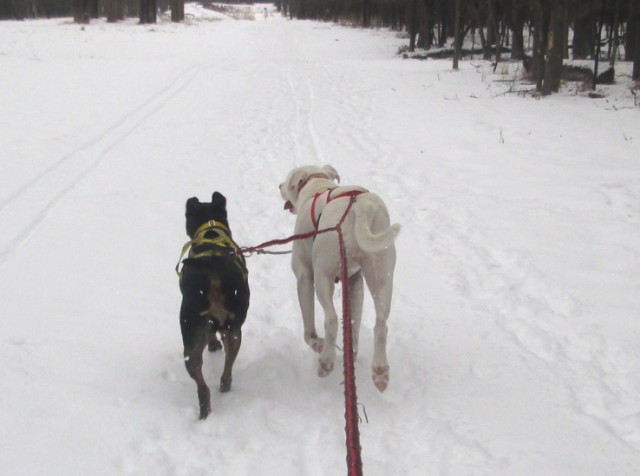 A bit later her previous, forgotten worries do not prevent her participation in the least tangled COME AROUND I have ever seen out of these dogs.

And then eventually, her worries are such a distant memory that she and her partner shoot back on the path with no reservations after I biff a left turn so far to the right that they end up doing as I appear to be doing, not as I say. (Clearly I must have meant GEE since I was going GEE.)

And then later, despite me so utterly mucking up the previous HAW, they unquestioningly and without reservation execute a HAW of such absolute perfection I could watch it a thousand times in a row. It’s not completely obvious from this video that there even IS a GEE (right) fork to this path, but I assure you there is. There is.