Over the winter we tried out a new skijoring trail that initially I adored. As the season wore on, though, it turned out not to be the greatest for skate skiing. It wasn’t groomed, and that was fine at the beginning of the season when the snow wasn’t very deep and it hadn’t been used much. But it was so heavily used as a walking and fat tire biking trail that it developed a very narrow packed central divot that was impossible to ski on, and once the snow got deep it was also too hard to ski off to the side.

But, I have been holding out very high hopes that it will be a good scootering trail. As I try to add distance and conditioning, my biggest challenge at the park where we usually scooter is finding long enough stretches of surfaces that will not wreck their feet. They have nice, tough feet and I actually don’t mind running them on pavement part of the time, but the park has used coarse gravel to fill in long stretches of the dirt trails that flood in the spring and after heavy rain and I really, really don’t like running them on gravel. Especially this time of the year when it sometimes still gets below freezing at night, turning long stretches of trail into frozen sandpaper.

Over the winter was the first time I had been on this new trail, so since today is a free play day for the youngsters Pip and I went on a scouting mission today to check it out. And I cannot stress enough how excited I am to get the scooter on this trail.

Having skijored this trail much farther than we walked it today, I know there are some fairly narrow and hilly areas further down, but for the most part it is wide, flat, and relatively easy with gentle curves and long straightaways. There are a few spots with a tiny bit of gravel that will be easily circumvented, but otherwise it’s just dirt as far as the eye can see. There really aren’t any side trails to cut down or give choices about which way to go, so it will be perfect for those days when I don’t necessarily want to work on a lot of commands, but just want to let the dogs run and work on distance and stamina. 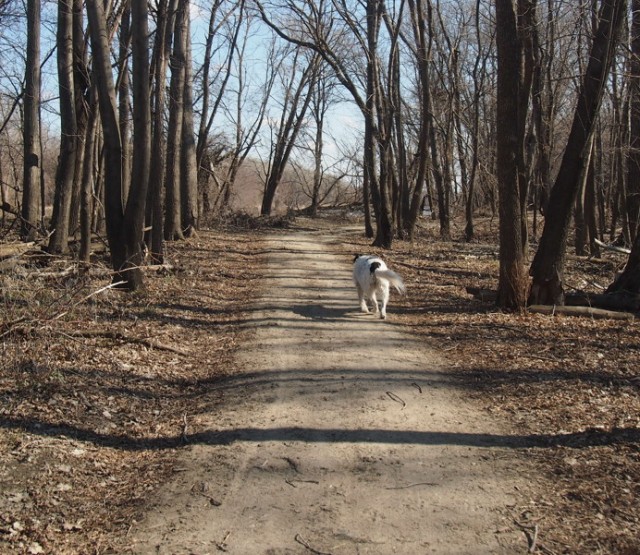 I’m hoping to get the youngsters out there late this week and try it out, hopefully we will have lots of pictures of a successful outing!