It’s been forever since I posted. Mostly because raising a puppy has been a time suck, and partially because of some (now resolved) dog health issues that came up. I’ve been scootering on and off with Squash and Maisy as the weather has allowed, here’s a couple of pictures from Easter: 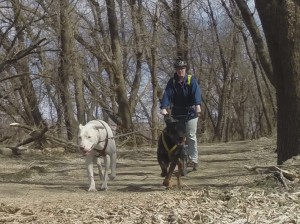 I’ve been working on a lot of canicross with Toast, and a couple of weeks ago I put Maisy and Toast in front of the scooter to see what would happen. (Note: I am walking beside the scooter, not riding it. The young boy isn’t really pulling).

Then today I woke up and randomly thought it might be fun to do the same thing with all 3 dogs. I decided to use the scooter first because on foot all three dogs gets to be a bit overwhelming, but with the scooter if they get a little too fast or intense for me I can either just drop it or hop on long enough to slow them down with the brake (again, I’m walking or jogging next to it, not riding for any longer than it takes to brake).

It was partially fun, but it was also kind of a cluster. I am not proud to say that I got a bit frustrated and annoyed and did a lot of heavy sighing and groaning, and even hollered a time or two, but I guess the silver lining of clusters is that they shine a spotlight on what training you sorely need to work on.

Hands down, the biggest thing we need to work on is “line out.” With one or two dogs, line out hasn’t been a totally essential skill to have nailed. Maisy and Squash are quite good at it when it’s just the two of them, but to be honest I haven’t been super picky about their lines being perfectly tight or them staying exactly in place. With three dogs, though, it turns out that there are exponentially more opportunities for tangled lines, bizarre mind-teasing tangles that will eff you up and waste precious minutes of your life you can’t get back. So training goal #1 is that I am absolutely going to need everyone to really hit their line outs perfectly. I see lots of practice singly, in pairs, and as a triplet in the future.

I also need to work with Maisy to unlearn running as half of a pair and relearn running in front on her own. The most annoying thing to happen (repeatedly!) today was that she didn’t stay out ahead of the boys enough. She wasn’t comfortable up front and would drop back between them, Squash ended up stepping over her line and getting it under him, and we had to stop and untangle. It’s perfectly understandable. She’s not used to being alone up there, she’s used to being side by side with Squashies. But when I say repeatedly, I mean about a thousand times so training goal #2 is to help Maisy build some confidence up front by herself. There’s always the possibility that just won’t work out, and then most likely I’ll continue to run Maisy and Squash in front and Toast behind them until Maisy retires.

The third thing is not really training, but I need to experiment with how my lines are set up. I won’t really be able to nail this down until Toast is mature, at his adult size and in his adult harness. You’ll see in the first video that the main gangline wasn’t quite right, there was slack between the boys. So I turned it around and tried again and it’s better in the second video. But I’m going to have to play with the boys’ tugs to get everything right.

The fourth thing has little to do with dogs, but I will need a bigger vehicle before long. With two dogs in the back seat the scooter can ride in the front seat, but with three it needs to go in the trunk. Which means I have to take a wheel on and off in addition to folding down the handlebars, and I end up spending more time tinkering with my hardware than running dogs, boo. Also, it won’t be long before Toast is too big to ride in the front seat anyway and they won’t all fit in the back seat as it is now. I won’t really be running them all three together until this fall, and probably won’t even do what I did today all that regularly, so there’s time. But I’m dreaming of cargo space where dogs ride in crates and scooter is proudly stowed in all its unfolded, un-dewheeled glory.

Anyway, here’s the first video. They actually did pretty well here for awhile. One of Maisy’s default stress behaviors is sniffing, so her normally stellar “on by” was not stellar today as she peeled off a couple of times to sniff stuff. But I think she’ll get the hang of it. You can kind of see how the section of the gangline between the boys is a little slack here.

Here I had turned the gangline around and it’s a bit better, although a slightly shorter tug for Squash would have been ideal. For now Toast is wearing a half-back he won’t be wearing forever. When he’s mature, the boys will be closer in height and length and Toast will be in an x-back, so I don’t think I’ll have to fool around much with their tugs.

Toast is a bit too young to really be pulling yet, but there’s plenty of training to be done and I’ll get Squash and Maisy out for runs as weather allows. So I’ll try to update more frequently! In the meantime, here’s a lovely picture of all the Mush Puppies in the backyard: