I think we all make plans for our dogs, from humble to grand. Plans that might work out or might get sidelined by health, temperament, time, training, or other circumstances. I’d like to think I do my best to roll with the plot twists we encounter, the ones I can’t overcome anyway.

When Toast joined our household, initially my only plan was to run the three dogs together until Maisy retires. Then I was envisioning Maisy and Toast up front and Squash behind, since Squash doesn’t seem to enjoy being in lead all that much. Then Toast kept growing and growing and I thought that’s cool, I can run Maisy up front and Squash & Toast together and Squash will have a partner as big as he is. It was easy to roll with because Squash has to alter his gait a little bit in order for Maisy to keep up, so I thought having two tall boys next to each other might turn out to be a good thing.

Then I actually tried that arrangement and it didn’t work out so well. Maisy didn’t understand and wasn’t comfortable with staying out in front by herself, so her line kept getting tons of slack which the boys kept getting tangled up in. Once we all got moving at a decent speed it worked out ok, but starts were a nightmare.

I resolved to work on LINE OUTs and try to build Maisy’s confidence up front, but really… she just doesn’t like being up there alone. She’s a pretty soft dog, and runs were making her very unhappy, so we rolled with it again and I put Maisy and Toast up front as originally planned.

Our runs have been pretty short since Toast is still young (and the weather has not always been cooperative this spring), but they are doing fantastic with this arrangement. Squash is SO much happier not being in lead. He’s far less distractible, easier for the other dogs to tug ON BY, and just jollier in general. Maisy is happy to have some company in lead who actually wants to play this game. Toast is overjoyed to be running, running, running. And my life is easier and happier.

Here they are on a run yesterday executing two nice HAWs:

BUT it is not all sunshine and unicorns. Here is a rare misjudgment by Maisy, not sure what she was thinking here but the boys just went along with it and at a certain point all you can do is laugh and try to figure out how to untangle everyone.

In other news, we got a new vehicle. Three dogs and a scooter in my little Ion was a little treacherous, so I went minivan and I don’t care who judges me for driving one, I have all the space in the world for everyone to ride safely and harmoniously. 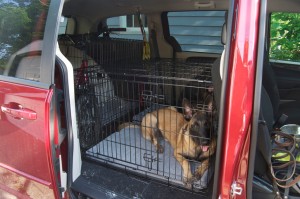 Three crates and a scooter.

So yea, that’s where we are. We’ve been getting an awful lot of rain this spring so we go out when we can. The dogs are doing great and the three of them are really coming together as a team. So for now at least, all is well and our current plans are working out.

1 Response to We Plan, Dogs Laugh