The Fellowship of the Mush

It’s been firmly established, I think, that not only do I often like to do things my own way but I don’t mind muddling through a bit of trial and error when it comes to problem-solving. Having said that, it sure is nice to have some backup. And I don’t mean the kind of backup that you kind of want to ask for help but feel like you have to secretly calculate the probability they will actually try to one-up, criticize, or try to put you in your place vs. providing any really useful advice before you decide if it is worth it to actually ask. Which I have encountered with a handful of other hobbies but not, so far at least, mushing. On the whole I have found mushers to be a cooperative and supportive yet laid-back group of people who know how to dispense useful information by way of a casual “hey have you ever tried ABC” or “I noticed you’re having trouble with X, one thing that I’ve found helpful is Y” and it would probably be an agreeable experience to sit down and chat with them over a beer. I’m sure some asshole mushers must exist somewhere, but if they do I haven’t met them yet.

Why this is relevant now is that when last we met I was having some blue thoughts about my metaphorical nibbling beaver. You know, the one that represents Squash’s growing mental and physical mushing superpowers that have him outpacing Maisy. Then Amanda of Hoof and Howl Sled Dogs, who happens to have Linney (Squash’s mom) and to have been Squash’s first momma, casually gave me some advice that required no secret calculations whatsoever. Try shortening Maisy’s tugline, she said, so that her head is about level with his shoulders. The goal is for him to be able to stay a pace ahead of her but for her to still work, pulling with a taut tugline.

I had to do cobble together some of the stuff I had on hand, which is a skill I am cultivating daily. I ended up using my single dog scooter line, with a tugline attached to Squash’s harness and one of my longer necklines guest starring as Maisy’s tugline thusly: 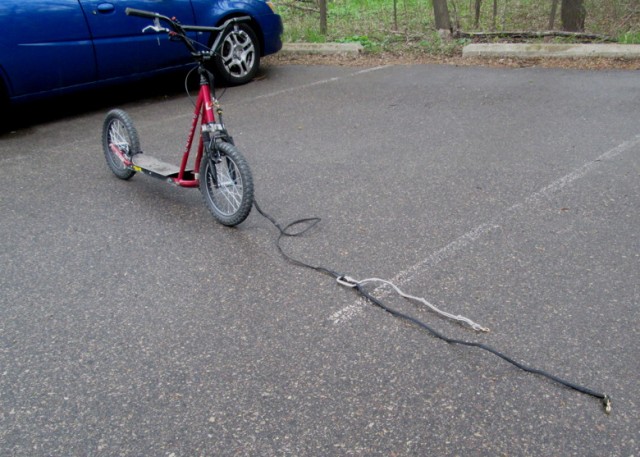 This picture of them lined out is a terrible for illustrative purposes because it’s really hard to see their relative positions and Squash has some slack in his tugline anyway, but I love the picture so I’m putting it here anyway. I think a heron or some other large bird flew off in that direction right before I took this. 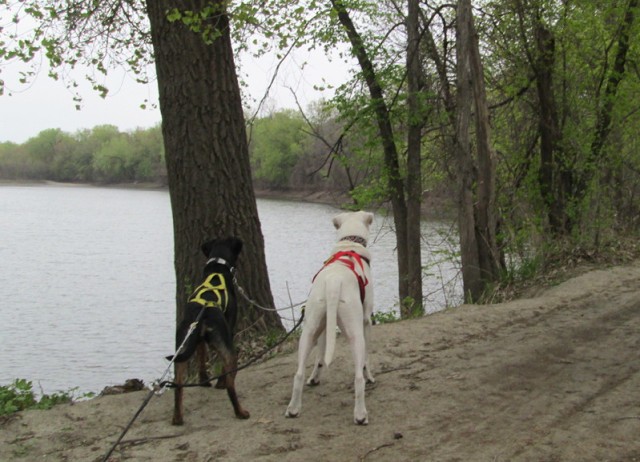 I’m still not clear if that specific water is considered the Minnesota River or the Mississippi River. There’s this weird convergence of the two right around here with some little connecting Minnessippi water fingers between them. But anyway, here’s a better picture: 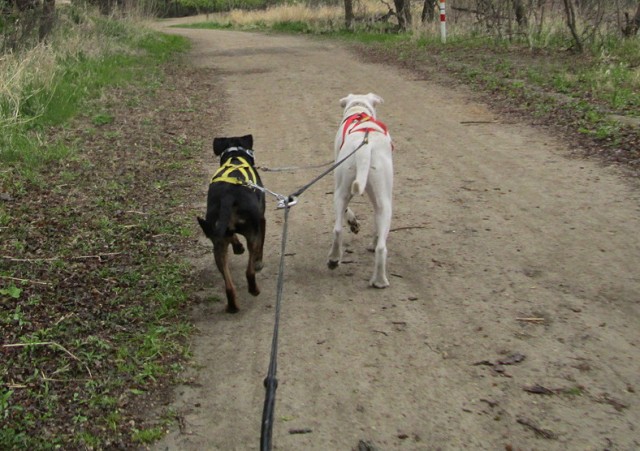 Look at them, both tuglines and harnesses taut, both working hard. And boy, did they work hard and run fast. This is maybe the most coordinated their actual pulling has been since… well, maybe ever. I mean, they’ve always run well together, but it took experiencing them truly pulling in concert for most of the run today for me to realize how much of the time up until now one dog has been pulling more than the other.

Most of the pictures I tried to take today ended up fairly blurry because we were going so fast, and I didn’t take that many anyway. Although I have the camera mounted on a GorillaPod on a belt at my waist, I still have to use one hand to click the shutter, and in all truth I was a little bit afraid to only have one hand on the handlebars a lot of the time today. So I didn’t have a ton to choose from, but I think the next two pictures show their relative positions the best:

Something that amuses me is that when Maisy got her yellow harness I started calling her “Maisy Bee” (because of the black and yellow, see), which somehow morphed into “Maisy Bee-Hind”, and now she really IS Maisy Behind.

Anyway, I think I would like Maisy’s real tugline to be just a touch longer, and I need something more durable than a spare neckline, but those little details are easily put to bed. The real story today is that my wee mush baby team was rescued from my blue, blue thoughts by the fellowship of the mush. That’s some pretty sweet backup.

Also…. turkeys!  Of course my trailhead was right behind them and I had to wait for them (in the drizzling rain, I might add) to wander off before I could get started.

This entry was posted in Equipment, Scootering. Bookmark the permalink.