April Skijors Bring…. something something.

In the weeks following my last post, enough snow eventually melted to break out the scooter for a couple of runs. Although the dirt trails were still way too muddy for the scooter (deep, sucking, wheels-can’t-turn muddy rather than simply messy muddy, which I can deal with), the roads were clear. Since we were limited both in where we can go and how much running I want them to do on pavement, it was a good time to ease into dryland training with a bit of nice easy gee-haw practice in some perfectly convenient interconnected parking lots.

Maisy was particularly jolly; she tolerates skijoring but her heart belongs to the scooter.

And as usual, the patented Maisy bump helps keep Squash on track.

But just when it seemed that the skis would be relegated to the back porch until next year, spring in Minnesota reminded us that it is a capricious beast. And apparently in 2013 it went all out in hopes of winning some kind of Most Fickle Season award. Snowstorm after snowstorm had already happily extended the skijoring season past its natural expiration date, so when I was packing for our spring vacation up north I went ahead and threw the skis in the car even though I expected to mostly be scootering as a repeat of our fall mushing vacation, and Fickle Spring did not disappoint.

Upon our arrival, I was thrilled to learn that the lake we were staying on was still safely frozen with a good 6-8″ layer of snow remaining on top. However, warmish daytime temperatures and a mid-afternoon arrival made my first outing (attempted almost immediately after unpacking) a bit of a slushy debacle.

The next day, my enthusiasm undampened but slightly more cautious, I decided to go scout out some of the local trails without the skis at first. This is when I learned that overnight each night, the snow re-hardened enough to form a nice, solid surface to hike or ski on – but only if we got up early enough to beat the slush. By the time we finished this hike we were already falling through the softening snow, so we didn’t do any skiing but did get a lovely hike in. (I almost always “walk” the dogs in harness and with the skijor belt these days, which I suppose is technically canicross.)

We found a trail of moose tracks, although we did not see an actual moose. The tracks didn’t look fresh and we hike with a bear bell anyway, so I didn’t expect to (and in all truth would rather not see one under those circumstances), but it was cool to see the tracks. 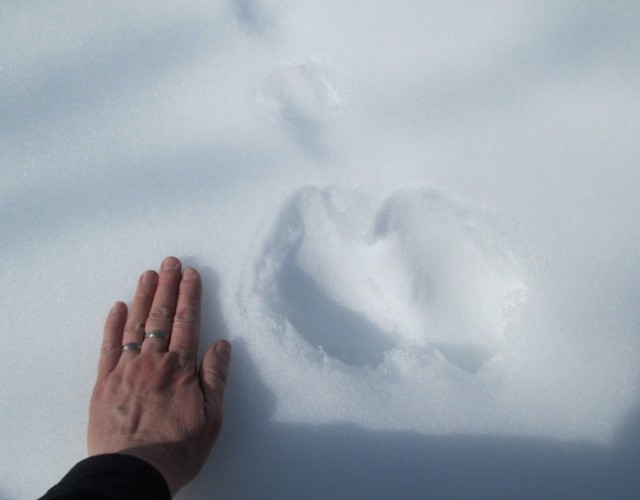 The next few days we got up early and went skijoring on the lake while the snow was still hard, and it was glorious. Smooth, flat, FAST snow as far as the eye could see with zero distractions, and the dogs really cut loose. This is what skijoring would always be like if there were no trail-side objects to sniff and pee on.

By the end of the week, my husband and Pip has joined us. Pip reveled in his honorary Mush Puppy status, which mostly consisted of running ahead of us or following behind us. 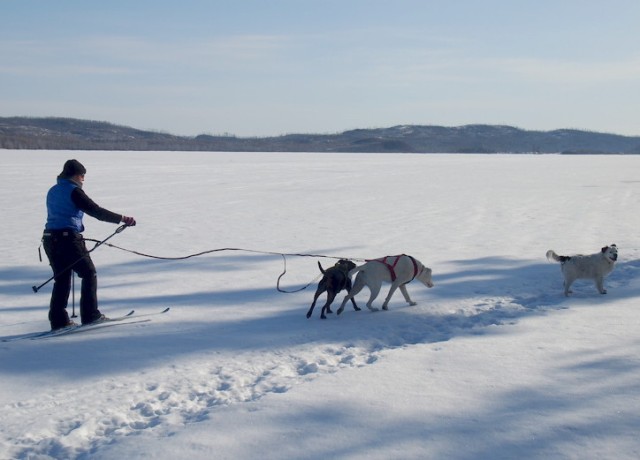 I love how jolly everyone looks. 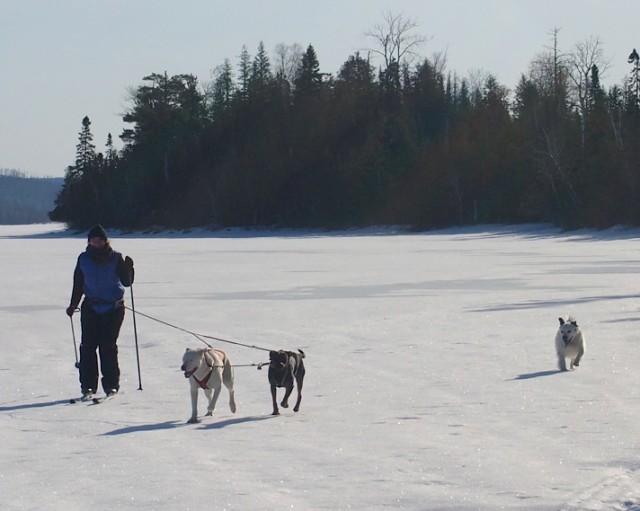 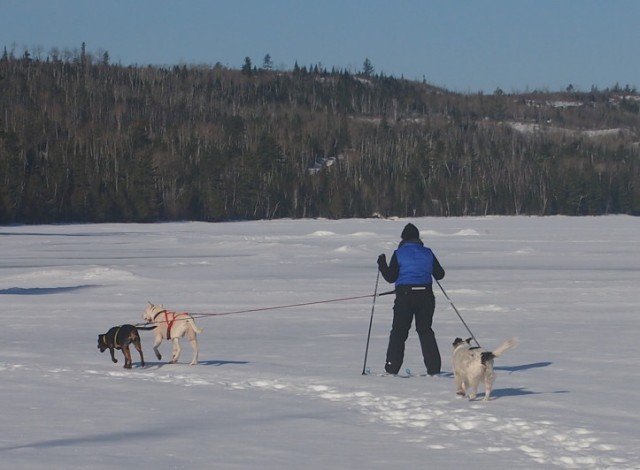 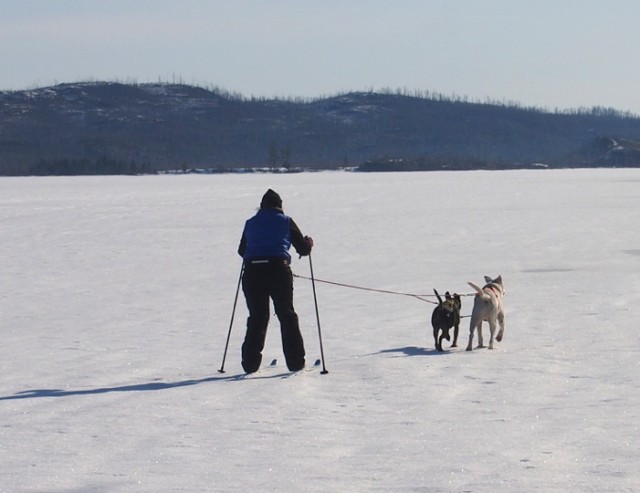 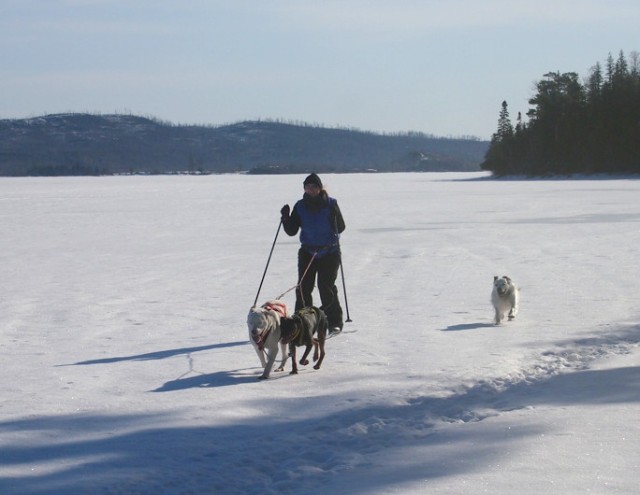 In the afternoons when the snow softened too much to ski on, we kept busy with canicross and scootering.

And then, at the end of the week… the tired Mush Puppies. 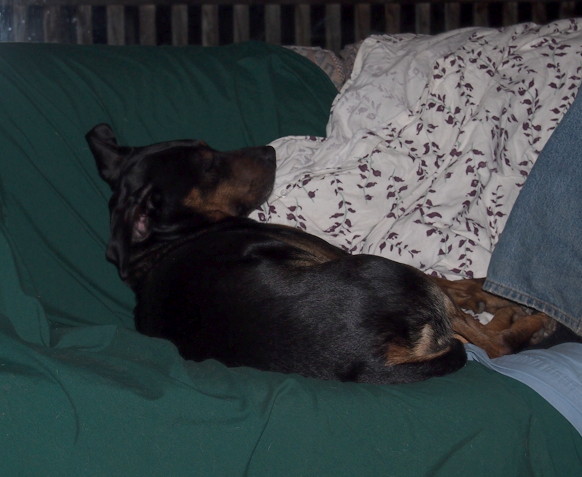 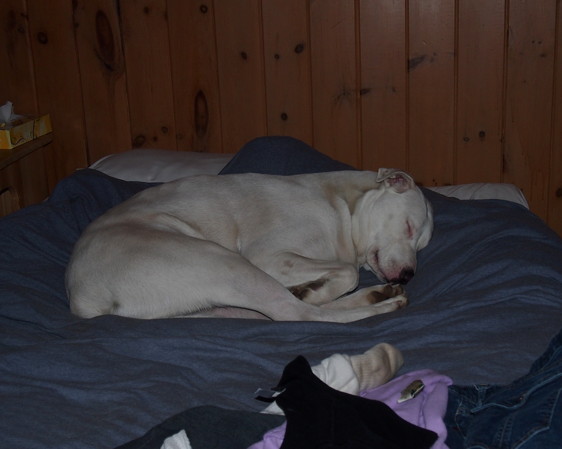 Given that it was in the 70s F when we got home today, I think it’s safe to say that this was really, really the last time we’ll be on the skis this season. So it will be all scooter and canicross for awhile, as it should be in a state with (usually) well defined seasons.

This entry was posted in Canicross, Scootering, Skijoring, Vacations. Bookmark the permalink.