Charity Begins at Home and Ends with a Training Epiphany

It’s going to take me a while to get to the point today, but I promise you I will get there eventually if you just stick with me.

I almost never take my dogs on “normal” leash walks anymore. If circumstances prevent other kinds of exercise, I walk them in harness attached to my skijor belt. I always feel a little guilty calling this canicross, although technically that’s what it is, because I almost never run or jog while doing it. We mostly just walk, unless the dogs are so enthusiastic that I will get pulled onto my face if I don’t move a little faster. But honestly, one of my dirty little secrets of dog ownership and training is that I really don’t care if dogs pull on walks; I just don’t want them hurting themselves or me when they do it, so walking in harness is a perfect solution to keep my arms and their necks safe.

I discovered the world of double-ended leashes (aka service leads, aka police leads, aka European leads) a few years ago and I LOVE them for walking the dogs this way. The leashes have no handles; rather there is a snap on each end, a stationary O-ring in the middle, and a couple of floating O-rings along the length. This makes the leashes extremely versatile. By clipping one end to the various O-rings, you can do anything from making yourself a belt to walk hands-free to making a handle if you like to easily clipping the dog to a stationary object like a small tree without having the unclip the leash from their collar or harness to clipping one end to a harness and one to your skijor belt. I prefer this rather than my usual bungee Y-line for canicross because I can “reel in” one dog if need be without affecting the other, and if we get into a busy area I can go ahead and switch the clips to their necks and leash walk them for more control. The skijor belt has plenty of built-in bungee for walking, so the leashes don’t need any.

Here are a couple of pictures of the leashes. I got mine at Karma Collars, a lovely company that is a real pleasure to deal with. The total length is eight feet. There are also many other companies that make this style of leash, too. (Ella’s Lead, Paco Collars.)

In this picture, I’ve got the two leashes clipped opposite from each other so you can see that the stationary O-ring is slightly offset; Squash’s lead has the shorter segment attached directly to him and Maisy’s has the longer segment.

This picture makes it easier to see both the stationary and one of the floating O-rings. 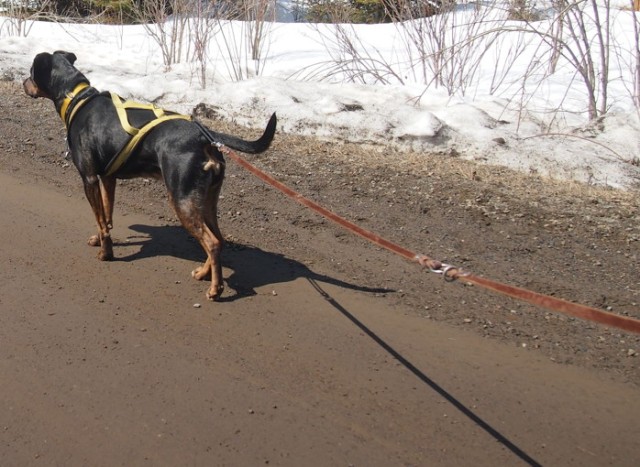 Every year I participate in a charity walk for a local shelter called the Animal Humane Society (not at all associated with HSUS, just to head off any angry emails). I wanted to walk Squash in harness this year both because he’s so adorable that way and because… well, because everything I’ve said up until this point. But at the same time, this event draws a crowd so even though Squash is a very friendly and stranger dog-safe dog he is also a large dog who sometimes intimidates others with his size and, uh, zest for life. So I wanted the option to have some control over his head/collar, too.

Suddenly, in a flash of inspired experimentation, I realized that I had the perfect solution if I just clipped the stationary O-ring to my skijor belt. The leash is perfectly proportioned so that with the shorter section then clipped to his harness and the longer section to his collar, we can walk with all the tension still on the harness rather than his neck thanks to a little bit of slack in the longer section. At the same time, I had the option of grabbing onto the longer section and using it as a regular leash attached to his collar when I needed to.

This picture illustrates this setup in action; the yellow arrow is pointing to the skijor belt clip/quick release, which is attached to the stationary O-ring. You can’t see the leash clips because they are behind Squash’s butt. 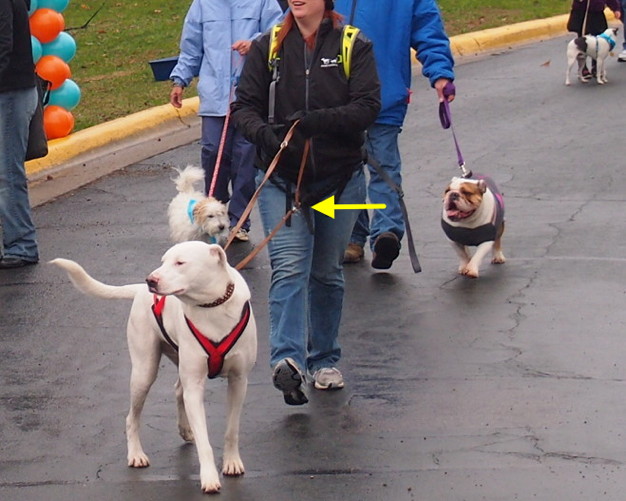 Where space allowed, I unclipped the end from his collar and just canicrossed; depending on how much space we had I clipped either the short or long segment to the harness and just held on to the other segment instead of clipping it to anything at all.

Where space was tight, I could easily reel him in and keep him close.

And this totally-not-candid picture just demonstrates the whole thing without Squash’s butt in the way. 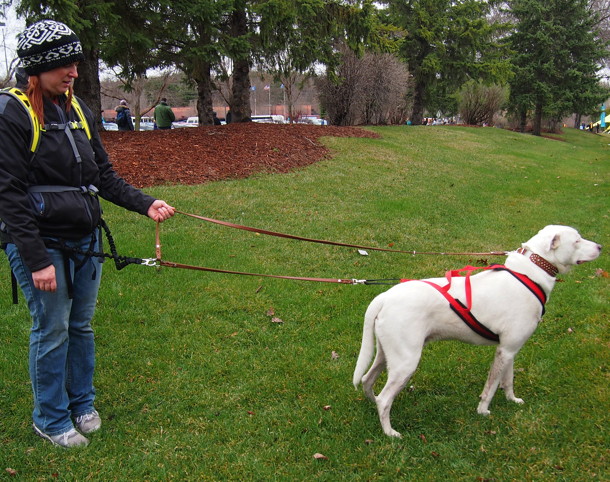 And now, after that lengthy prologue, I am finally pulling into the “here’s my point” station. Because as I was walking along feeling pleased with myself for finding yet another reason to love a leash I already love pretty hard, I had an internal monologue that went something like this:

Dangit, I really wish I’d had a setup like this for training ON BY on walks/canicross when Squash was younger, because some gentle collar tugs would probably have worked pretty well as an attention-getter for him to get him moving when he was tuning me out. Oh well…

HOLY SHIT THIS WILL BE AN AWESOME SETUP FOR PRACTICING “ON BY” WITH SQUASH.

I put it to the test right then and there since there were approximately one million pee spots along our route where thousands of other charitable people were also walking and their charitable dogs were peeing. To be clear, I’m not a harsh corrections, collar pop, or “yank and crank” kind of person. But much like Maisy pulls him back on the trail with the neckline to enforce an ON BY, just a quick pull on Squash’s collar really did make a difference even in that super distracting environment.

When Maisy is with us I won’t need this setup because she IS the setup. I’m pretty sure she would go on by a magical portal leading THIS WAY TO EVERYTHING MAISY LOVES BEST IN THIS WORLD, and she keeps him on task. But ON BY when it’s just Squash and me has been something I’ve struggled with, so I have high hopes for integrating this into training.

One last note: I highly doubt I’m the first person in the world to think of this, so if you’re rolling your eyes at me right now I assure you that I’m not about to take credit for inventing it or slap my name on it. But it also isn’t something I’ve personally ever heard of or seen described before, so I wanted to share it since a large part of the point of this blog is to share things that work for me with other baby mushers. KNOWLEDGE IS POWER, even for mushbabies.

Also, please note that these leashes typically can be ordered to a specified length and mine are eight feet long total. I don’t know that shorter or longer leashes (or the same leash used with a larger or smaller dog) will be proportioned as perfectly, but I suspect not. Oh, happy dumb luck how you favor me. Any other mushbabies who want to try this will probably have to do some measuring. Or use two leashes. Or some other inspired idea – but I’m really only good for one per day.

This entry was posted in Canicross, Equipment, Training. Bookmark the permalink.