It’s that time of year, the slow season up North when it’s too late for trails to be used for horseback riding but too soon for them to be used for snowmobiling and skiing. The perfect time of year to repeat last year’s fall mushing vacation. The Mush Puppies and I spent almost a whole week just scootering and cani-hiking around in between catching up on our reading, movies, and knitting.

This is how Maisy rode most of the way up:

The first day we got in too late to do any scootering, but they settled into the cabin nicely. My dogs, the dirty segregationists: 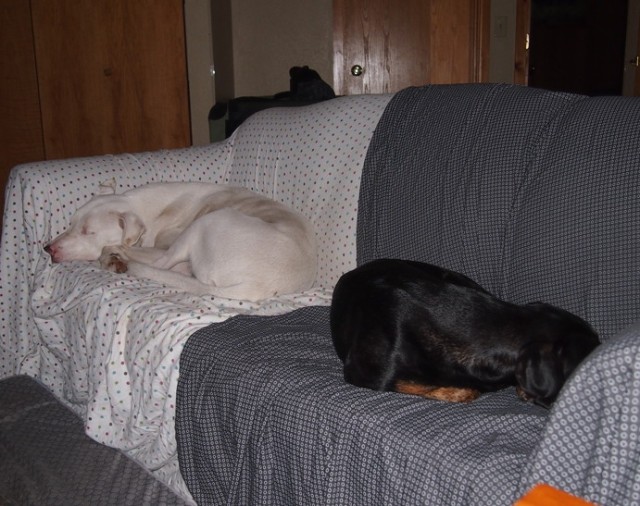 The next day, we went out bright and early and it was nice and crisp. I’ve been working hard on lining out politely and waiting to start without dragging or forging, so this picture makes me happy with the scooter standing up all undragged.

Sometimes Squash gets a little impatient. ARE WE GOING YET?!

One of the many lovely things about where we were staying is that it’s perfectly safe to leave your GoPro lying around trailside without having to worry about it getting stolen, because there’s really nobody else out there. I did not so much as glimpse another human being the whole time we were scootering and hiking (and if I had, I don’t think anyone would have taken the camera anyway). Since it’s really not safe to do this at home, I had a bit of a learning curve but the pictures slowly improved over the week. 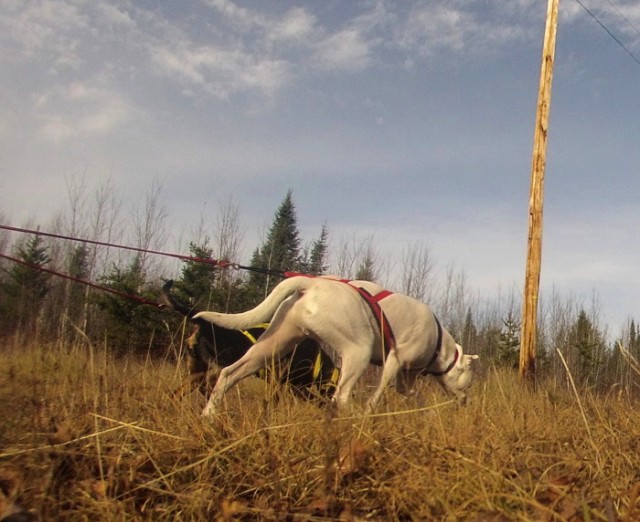 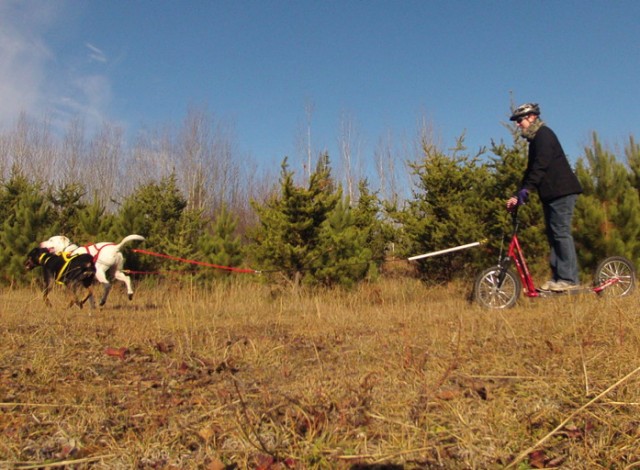 And a nice video from the GoPro:

After a few days of scootering some familiar trails, I decided to give the MPs a break from pulling the scooter and scout out some new trails with them on foot. When I hike with them, I don’t use a neckline although they are in harness and attached to my skijor belt. One thing I’m seeing happen more and more is, although there is a fair amount of this stuff… 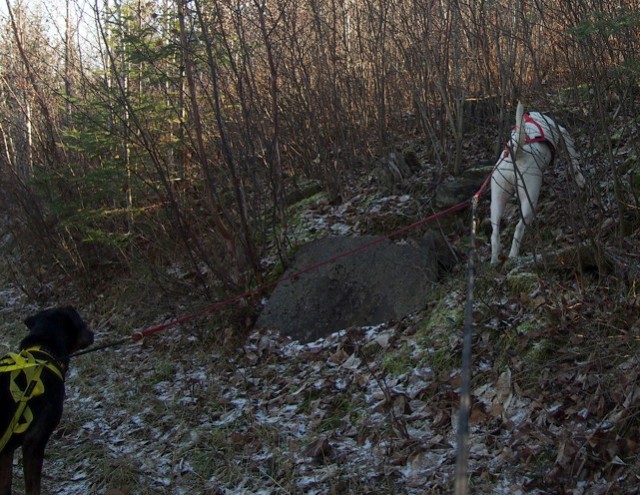 …there is also a fair amount of this: 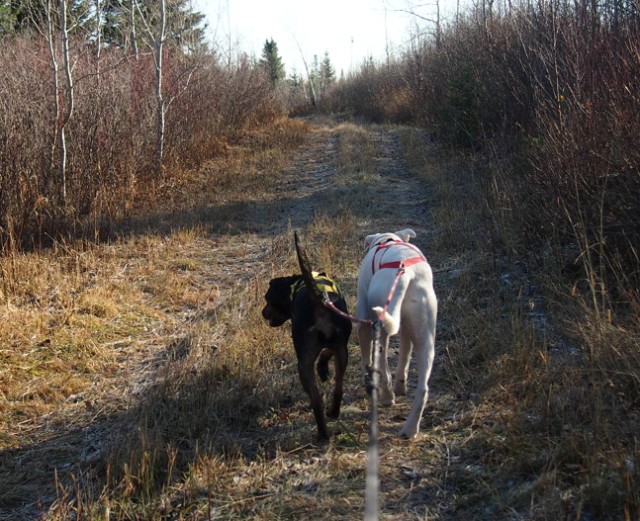 where they stick together and act like a team.

Anyway, I was trying to figure out if there was a scooterable loop of decent length I could cobble together. Based on the trails I already knew, I thought I had about 2/3 of a rough oval accounted for, but wanted to see how they all connected. The first third of the loop was unfortunately too hilly to be practical for the scooter, but it did lead us to a lovely view of Gunflint lake (the dogs thought posing was dumb, though): 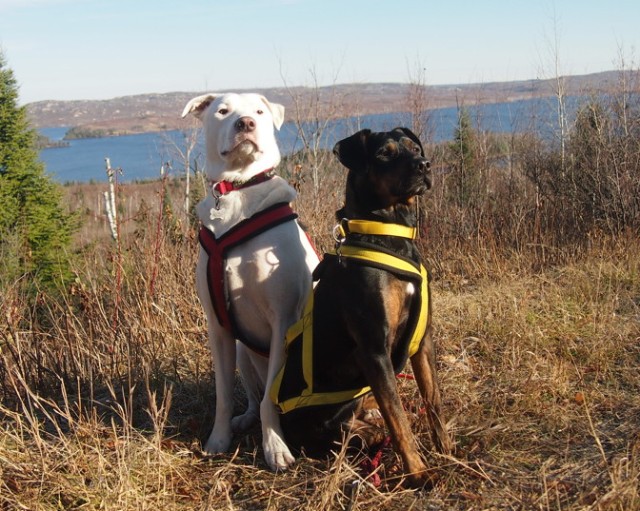 The new-to-me trails did join up with our familiar trails where I thought they did and ultimately lead back to our starting place, but what I did not know is that while in my head the final segment was about 1/3 of the loop, it in fact consisted of a series of switchbacks (in both elevation and direction) that made its actual distance on foot (vs how the crow flies) more like 1/2 of the total distance of the loop. Thus, we spent about 2 1/2-3 hours hiking that day. It was fine from a time standpoint because we were on vacation with nothing to do and all day to do it and I had the benefit of being attached to dogs who were pulling me up and down those hills, but… I ended up with shin splints on my shin splints, which then gave birth to wee baby shin splints. And I’m in the process of writing my new “melt away your saddlebags by cani-hiking up and down hills for 3 hours” because those things were sore for 2 days afterwards.

All of which meant the next day was a rest day. An adorable rest day. 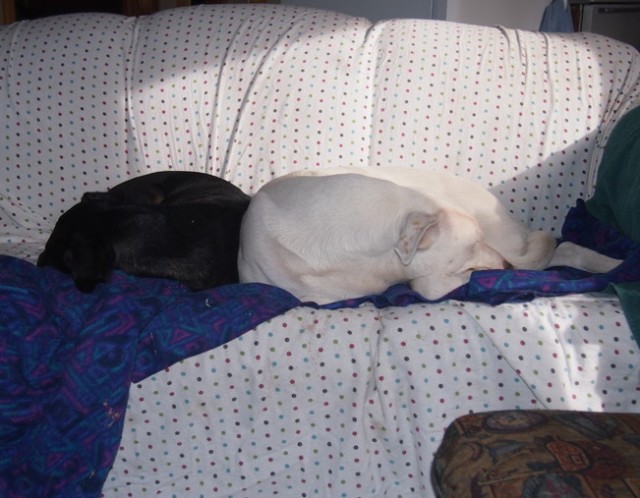 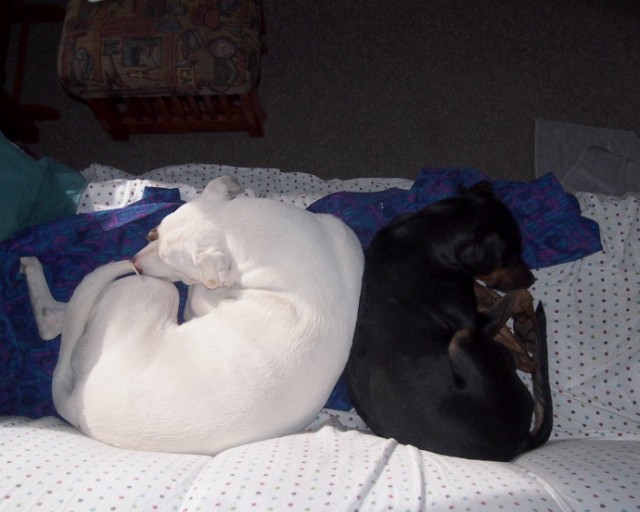 I had brought a little pink round bed for Maisy and a big square bed for Squash, who then decided he liked the little pink bed. There were minor skirmishes regarding the ownership of the pink bed all damn week. 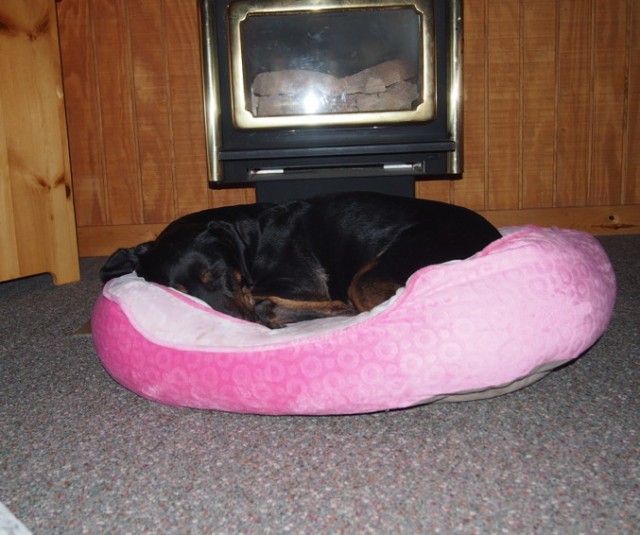 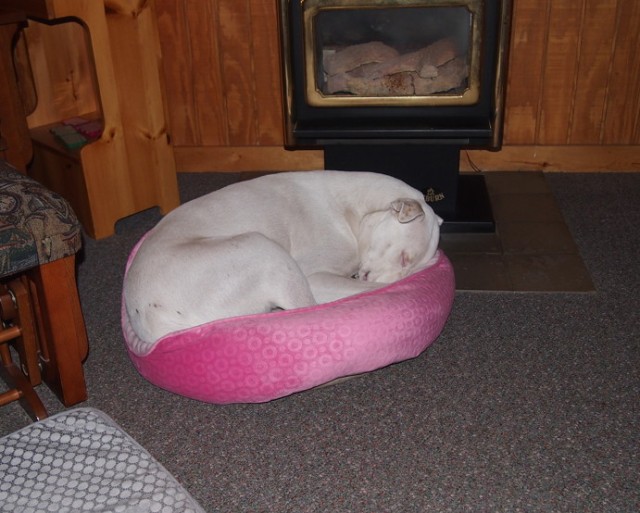 Which culminated in this theft:

But there was always the couch: 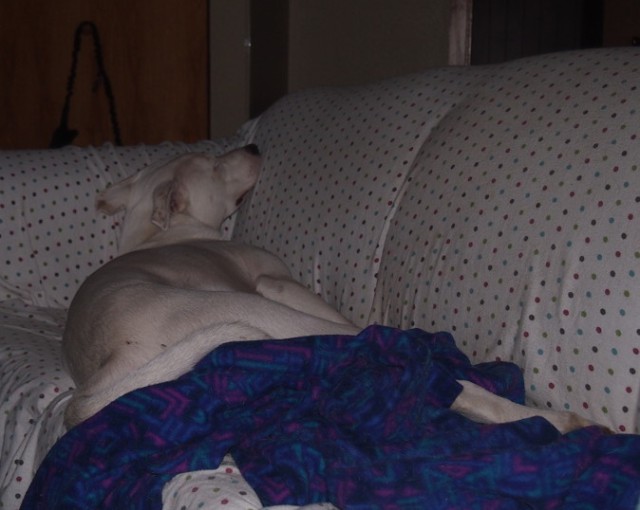 Our last full day there, we woke up to this:

And so OF COURSE we went hiking up the high trail because it was effing beautiful.

I think he was hunting wabbits or something. 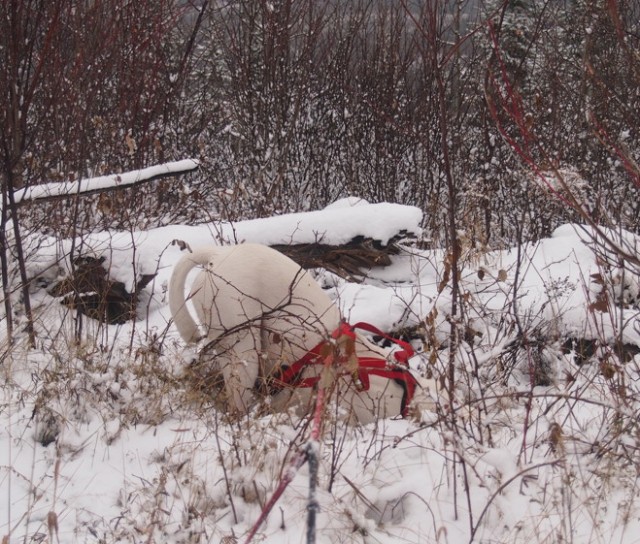 Evenings were often filled with frivolity of the “overtired and overstimulated toddler” variety. 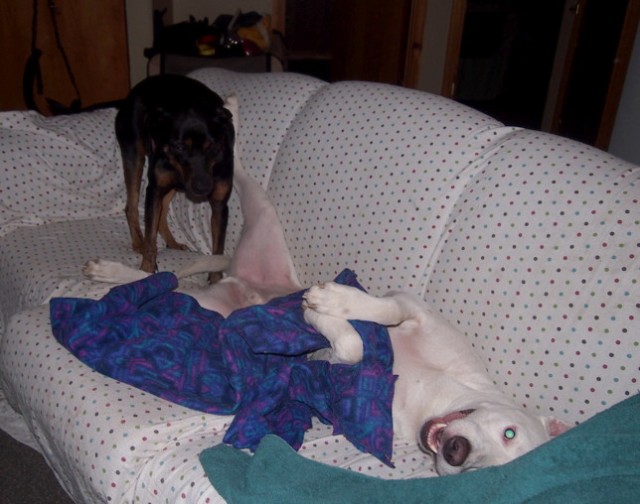 Followed shortly by dogs who passed out until the next morning. 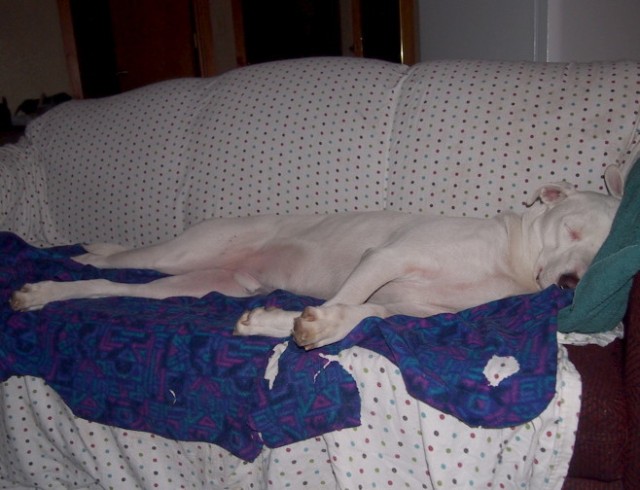 So that was our week. In some ways it was exhausting and in some ways it was rejuvenating, but in all ways it was wonderfully restorative. I got to spend a lot of time with my dogs and myself and no one else, in an extreme introvert’s paradise. I got to see my dogs looking great as a team, even better than they did at this time last year. We got a lot of work and training under our belts, but as usual we also had a lot of fun. And hopefully a picture-laden post-vacation post will continue to be an annual tradition for many years to come.

This entry was posted in Scootering, Vacations. Bookmark the permalink.